This morning at 6:20am I was out on the front lawn of our home with our aging puggle, Tucker, when I heard an alarm. Ugh, I thought, one of the neighbors must have forgotten to disarm their alarm and then opened their door. As I went back into our courtyard, I realized it’s our house!

I ran inside. My husband, Hank, met me in the hallway. The alarm panel in our front hall read “Fire 01.” I disarmed it while Hank dashed around checking the house.

The alarm company called. I held on with the operator while Hank finished the search. Nope, no smoke, no heat, no shower steaming around a smoke detector. No fire. No smoke. All clear.

“We’ve sent for the fire department to come but we’ll tell them it’s a false alarm.”

“Yes, I’d hate for them to have to come out for nothing,” I said.

“Something must have triggered the system,” the male operator suggested. “Would you like me to set you up with service?”

“They’re coming Monday,” I said to Hank after ending the call.  “You were up with Tucker a lot last night. Go back to bed.”

I went into the kitchen to make coffee when Tucker began barking. I ran to the window. A firetruck! Dressed in a nightgown, my hair a crazy mess, I opened the front door to three firemen coming through the alcove into our courtyard. Hank came up behind me.

“I’m so sorry you guys,” I told them. “It was a false alarm. The alarm company thinks something triggered it.”

“You’ve checked around the house?” asked the larger of the three through his mask.

“Thank you so much for coming. I’m so sorry this brought you out here. I told the alarm company to tell you that it was a false alarm.”

“Yes, Ma’am, they did contact us, but we wanted to make sure and check it out.”

“Thank you so much…” I repeated, as they departed back to their big shiny fire engine out front. I thought of our granddaughter, Grace, who is obsessed with fire engines. She’d loved to have seen this.

“Those guys,” he said, making his way back down the front hall.

I went back into the kitchen. Pulled out the coffee maker. And stopped. 9-11.

The night before I’d been riveted by a National Geographic documentary on 9-11. The lasting image of those brave men and women. Their faces. Hoisting heavy hoses on their shoulders, ready to go up those stairs to save people. The look in their eyes. It never got old looking at those images.  We must never forget. Bravery in the midst of destruction and death.

I threw on clothes, grabbed my car keys and headed to get donuts. I needed to thank these guys.

The window in the donut shop said: “Cash Only.” I never buy donuts. How much could they be?

Emptying a pile of quarters onto the counter, I began counting. “It’s for the firemen,” I said, riffling through my handbag for random change.

“It’s ok,” he said, handing me the box. I detected a smile behind his mask.

I made my way back to our neighborhood fire station and pulled in the short driveway. The garage was open. The same three firemen who had been at our house, pulled on their masks as I got out of my car with the pink box in hand. 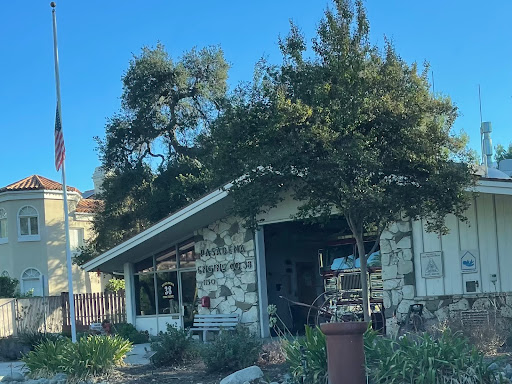 “Yes,” the tallest one interrupted. Everything Ok?” His eyes showed concern.

The other two held back. One had a rag in his hand, the other looked pensive at the ready to help.

I handed him the box. “I just want to say thank you.”

“Oh my gosh,” the fireman holding the rag said. “We love big boxes!”

I smiled beneath my mask, then, something hit me when the fellow holding the box met my eyes. “It’s such a kind gesture of you to do this,” he said.

“Last night, I watched the National Geographic documentary on 9-11. I was…” I paused.

“So moved. Then, this morning you came – even though you got the false alarm – just to check!”

My throat closed with emotion. The flag was at half-mast on the pole beside the station.

“I mean, you guys are amazing.”

My eyes filled. That big, tall firefighter holding that pink box, his eyes, too.  I saw the emotion there. Something a mask can’t hide.

“We appreciate this,” the dark-haired firefighter that had hung back told me. “As my guy over here said. “We like big boxes.”

“Thank you so much for taking the time to check on us. And for not having the sirens blazing as you came up our street,” I laughed.

The sun was just peeking over the hillside as I slowly drove home. I wanted to take it in. I thought of all the firefighters out there. The ones who’d been fighting all the wildfires. The ones who’d run into flaming homes, apartments, businesses. The ones who put out car fires on freeways. Those who just “check to make sure.”

In the documentary, one of the firefighters spoke through a maze of dust and debris as jet fuel spewed from the elevator shafts, and fires raged many floors above. Carrying heavy gear on his shoulder and back, he looked toward the direction of the stairs. “We just need to get up there to help these people.”

Posted by Heather Haldeman at 9:35 PM