I met my future daughter-in-law, Anna, when she was four years old. She was holding her mother’s hand on the cement walkway that cut through our children’s grade school.  I'd stopped to chat with her mother, Sally, after she’d dropped off her son. “This is Anna,” Sally said, after we greeted each other.

An angelic face, framed in blonde hair fastened to the side with a big pink grosgrain bow, gazed up at me. Her eyes were sea blue and sparkled. She leaned in closer to her mother and uttered a shy hello.

Just steps away, in a fourth grade classroom, her future husband, Allan, was opening a science book and chatting it up with his seatmate.

Years later, our children grown, Sally and I would meet for tea at the Corner Bakery to catch up. In our conversations, it came up that both Anna and Allan were single. “Oh, if only they could meet…” I sighed. “She’d be perfect.”

I even brought it up to Allan. “You know, this Anna Howell, I think you’d like her…”

It wasn’t me who arranged their meeting, but a Howell family friend who also knew Allan. “Morgan sealed the deal,” Sally laughed, when I called her the day after Allan confessed to me at dinner that he’d been seeing Anna.

Soon, they had jointly adopted a scrappy little terrier, Judy, and made a home in a cozy little bungalow in Santa Monica.

Then, when Anna entered medical school on the East Coast while Allan built his career here in Los Angeles, a long distance relationship proved to be a challenge.  There was a break-up.

Three years later, "She got USC!" Sally said to me on a call. "You should see the flowers that Allan sent!" Anna had gotten her first-choice residency.

A few weeks later at the wedding of a mutual family friend, Hank and I saw  firsthand how Anna and Allan had found each other again.

At the start of that weekend, Anna invited me to meet for coffee at the Sorrento Hotel. “Let’s just reconnect,” she’d said with a lilt as she plopped down across from me at the table. Dressed in jeans and a loose sweater, a touch of mascara on her lashes, she'd whipped her blonde hair into a messy topknot and settled in. As she talked, it was clear that they'd both grown up, matured, and realized that a successful relationship meant give and take.

This past August, after Allan and Anna had just moved into their new home, our family was facing some challenges. Anna jumped in, making her and Allan a part of the solution.  Then, a couple of weeks later, on a Sunday morning, Allan asked Anna to marry him at the kitchen table over an omelet and The New York Times. It was the joy we all needed.  Newly engaged, and at a time when she could have made it all about her, Anna made it all about family. “It’s nothing,” she’d said when I thanked her for being so helpful during this time. 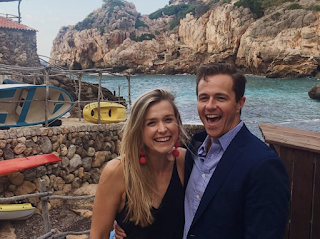 "Nothing," actually, was really something. This young woman, I knew, was special.

Last Wednesday, Anna called. “I just want to spend a little time with you,” she’d told me. "I'm taking next week off, so can I come by Sunday?"

Still, she showed up. Anna always does.

This Saturday, I will watch my oldest son, Allan, stand and wait for his bride to walk down the aisle, that little blonde with the pink bow, all grown up.  She will dazzle and those eyes will sparkle.

Allan will take her hand and wed the love of his life. And I, his mother, will look on, handkerchief at the ready. I’ll squeeze my husband's hand and he will glance at me with that solid, knowing look in his soft brown eyes. Together, we’ll watch our son and his new bride, and be thankful.
Posted by Heather Haldeman at 10:03 PM No comments: