A Day To Remind Us

My husband, Hank, and I celebrate Valentine’s Day on April 4th. It’s the day that I picked years ago when Hank suggested we choose another day. “I’m not going to celebrate Valentine’s because it’s a Hallmark Holiday. So, pick a day,” he’d said. “We can call it 'Heather Appreciation Day.'”

So, that’s our (my) day for hearts and flowers.

Over the years, I’ve adopted Hank’s cynical stance on Valentines Day, shaking my head at all the people dashing about trying to please their lovers because the day dictated that they do so.

Valentine’s Day can put pressure on love. This year we were in Washington DC. I’d stopped into a gift store, looking to pick up a warm scarf after eyeing a stack in the window. It was thirty-seven degrees outside. How had I forgotten to pack a scarf? I grabbed one from the stack and took my place behind a young woman at the wrap desk. She peered over the high counter at the saleswoman. “Can you put extra tissue in the gift bag? Make it a little nicer?”

“Sure,” said the saleswoman, fluffing more tissue and toping it above the bag.

“It’s just,” the young woman paused, wiping her hands, habitually, on the Shake Shack apron tied around her waist. “I’ve been saving up. My girlfriend’s always wanted a nice handbag.”

Just then, a breathless young male executive burst through the door.

“Can I help you?” the saleswoman asked, looking up for a brief moment while working the tissue.

His eyes shot around the tiny store. “Do you have any furry socks?”

“My girlfriend,” he said, his rep tie now slightly askew. “She wants furry socks for Valentine’s. This is my fourth store.”

“Too late for online, huh?” the saleswoman laughed.

“Ugh, thanks,” he sighed, turning toward the door.

The saleswoman looked at me with a smile so bright it could put your eyes out. “I’ll be right with you,” she said. “Been like this all day,” she added, reaching for the ribbon to finish up the handbag giftwrap. “People coming and going. Buying gifts just to have something.”

Walking back to the hotel, I came upon Caruso’s Flower Shop.  White plastic buckets filled with flowers spilled out onto the sidewalk. Heart-shaped Mylar balloons attached to the railing with pink ribbons swayed in the breeze, enticing those “last minute lovers” as the daylight was coming to a close.

In front of me, a scholarly-looking gentleman in a brown tweed overcoat, reached into one of the buckets pulling out a bunch of pink tulips. “How much for these?” he asked the male employee close by.

“For eight droopy tulips?” he asked. “Not, doing it,” he said, stuffing the tulips back in the plastic bucket.

Back at the hotel, we were getting ready to do drinks with our business friends when an older man named Brian, after a day of expert witness testimony in a DC courtroom, he told us, wandered into the small library as Hank and I were rearranging club chairs around the coffee table. “Pardon my wandering in,” he said. “I just love this room. So cozy,” he added, gesturing to the fireplace.

He’d made reservations for dinner at the hotel restaurant. “You know,” he smiled, “a fancy dinner for my bride of forty-four years.”

“No,” he frowned. “Just called me. Said she’s too tired to make the hour-long commute.”

“Know anyone who needs a date on Valentine’s?” he joked, and stayed until our friends arrived. 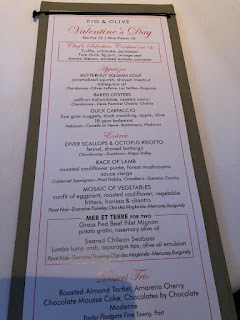 After drinks, we headed to the restaurant. The hostess seating us was dolled up in a red lace dress with stilettos to match. She planted an over-priced pre-fix menu in front of me. I looked hard at it, realizing that I hadn’t been out on Valentine’s in years. Wow, this is what a Valentine’s menu looks like? Kind of like New Year’s Eve for lovers and we’re-going-to-have-a romantic-time-no-matter-what menu?

Beside us, my eye caught a couple somewhere in their sixties, same age as Hank and me. The wife, her bare, aged arms crossed, was wearing bright red lipstick, marking thin lips. They spoke in whispers as their dessert arrived. Her husband (I spotted the wedding band) picked up his fork, only to be distracted as his eyes followed a youthful woman in leather taking a seat with her mate at the next table. The wife looked up, gave him a look and tucked back into her dessert.

He muttered something to her.  Soothing, I think, but his eyes. They told the story.

Exiting the restaurant, a row of red-clad women, across from their valentines, lined the glass frame of the restaurant - the night to celebrate love.  Ugh. So forced.

Back in the hotel room, I flipped on the news while we packed to leave in the morning. Images from the latest shooting filled the screen. I paused to sit down on the bed, a stack of clothes in hand, and watched, heartbroken.

In the morning, I awoke and pulled back the curtains. Across the street the American flag was at half-mast on top of the National Education Association building. I stared at it, trying to make sense of the latest school shooting, on a day that was supposed to be about love.

I could scoff at all the hoopla, the commercialism, the angst over furry socks, over-priced tulips, even a fancy dinner alone, but this morning, I didn’t.

It felt different this year. A calendar day rooted in love is nothing to scoff at.

Posted by Heather Haldeman at 8:56 PM No comments: