I’d just finished reading him the itinerary for a walking tour with my friend, Anne, from Connecticut.  She was in L.A. for a few hours with her husband, Bob, who had a board meeting with Hank.

“Ok, good,” he said. Hank was relieved, knowing my fear of heights. “I thought you meant the one on top of the US Bank Tower.

I looked out across from the 18th floor of Hank’s office to the City’s current tallest skyscraper. My eyes slowly scanned to the top. “That one?”

“It’s the one with the glass Skyslide,” Jan, Hank’s assistant, said, stepping up to the tall window.  “It’s easy to get to, just cross over…”

I looked over at Anne eyeing the building.  She was no stranger to a challenge. This was the woman who when she turned fifty, took on fifty new things in her fiftieth year that she’d never done. “Not a Bucket List,” she told me. “It was more like that someday is today.”

“We can do Beverly Hills and The Ivy,” I said, trying to steer her away from the idea of the Observation Deck. “Or, how about Santa Monica and…”

“No. No,” she said, eyeing the skyscraper. “This sounds great.”

I don’t recall when my fear of heights started, but it got worse about twenty years ago when I found myself gripping the car door handle for dear life along the high cliffs of Pacific Coast Highway on a road trip to Big Sur.

“I’m not real good with heights,” I told Anne. “And I won’t do that slide thing.”

“Whatever you want to do, Heath, is fine with me. Really.”

I thought about my conversation with my friend, Joanie, the day before. We were discussing my sixtieth birthday in two weeks. “How was it turning sixty?” I’d asked her.

I picked up my handbag and the itinerary. “Ok, Anne. Let’s do it.  It’s time I step out of my comfort zone and deal with this fear.”

I started to lose my bravado, though, on the elevator ride up.  It was dimly lit and the small blue numbers in the corner just kept climbing. “Anne, you do know we’re in earthquake country?”

The elevator opened and we made our way to the deck – the enclosed deck.  The panoramic view was magnificent but my mouth went dry as I ventured over to the windows with Anne. I tried to keep my eyes on the view in the distance. A flight attendant had given me that tip once.  It wasn’t working.

“There’s the Hollywood sign,” Anne said. “What’s that to the right?”

I stepped back toward the center wall. “The Griffith Park Observatory.”

As we made our way around and past the entrance to the Skyslide, I tried to put Anne off. “Now, those are the San Gabriel Mountains… and below that…”

I spotted the Well’s Fargo Building. “I’m just going to call my cousin, Jonathan, over there on the eighteenth floor.”

I needed back up, someone to talk to. Channeling a game show, I made a “safety call.”

I watched Anne meander back to the slide.

“Hi Jonathan, I’m across the way with a friend from out of town and she wants to ride the Skyslide. It scares the hell out of me.”

“Oh, you couldn’t get me on that thing. So, where are you going for lunch…”

“Hey, Heath, come on over here,” Anne called out.

Before I could say goodbye to Jonathan, the call was dropped. So much for safety.

Two young male attendants were at the entrance with a scanner. “Oh, see, the sign says that it costs $8,” I said. “I’ll treat you and just hang back.”

“No worry,” the taller one said, “the ride is free the month of November.”

“It’s meant to be, Heather…” Anne said with a smile.

Eyeing the entrance to the glass chute, my mouth got even drier. “Those things,” I asked pointing to a stack of thin mats. “Do you sit on them?”

“Yeah, it’s easy.” He picked one up and showed me the handles attached. “You hold on to the handles here and off you go. A four second magic carpet ride.”

“How old is the oldest person who’s ever done this?” I asked. “ I mean I’m going to be sixty this month.”

I peered beyond him at the glass tube, the knots in my stomach tightening. “I can’t Anne. You go ahead.”

I climbed the stairs. Tentatively, I took a seat on the mat that Jeff, the attendant at the entrance to the slide, had laid down. He was young with a clean beard and a soothing voice I swallowed hard, looking down the glass chute. “I can’t break the glass, right?”

“No, the glass won’t break. It’s quick. It’ll be over before you know it.”

“Now, hold on to these handles and sit straight. Don’t fold into the corners. You’ll feel like you want to but sit upright.”

“You’ll be fine,” Jeff smiled. “You can do it.
I put my handbag between my legs, then, sat frozen, gripping the handles. I inhaled deeply, telling myself not to look down.

“Do you want me to push you to start?” Jeff asked. 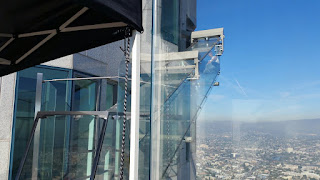 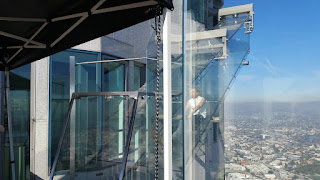 “Wow!” I said, shaking as I stood on the padding at the end of the chute. “Anne, I feel like I had six martinis and no slur!”

My legs felt weak as I stood. I was so high. 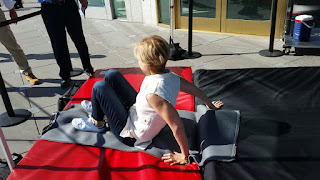 I’d faced it. Done it. And had come out the other side. Wearing a cape  - not a bib. 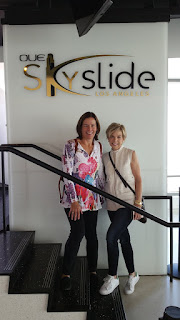 Posted by Heather Haldeman at 7:21 AM No comments: