What Would You Do If You Were Dating Him?

“Just leave! Go away!” the woman skiing close by me yells at a man I think must be her husband. “Leave me alone! Stop telling me what to do!”
It’s early and the snow is piste, a European term for the smoothly groomed slopes this woman is chopping up as she snowplows through a switchback to navigate the easier intermediate blue-grade slope. This couple look to be about my age, in their early sixties. Hard to tell, though, behind a helmet and googles. The husband’s clearly an expert skier, swishing up beside her in in a perfect parallel while she, dressed to the nines in high-end Bogner, is hunched over with her skis in a pizza slice.
“Just use your edges, honey,” he tells her, calmly.
“Goddamn it!” she yells. “Leave me alone. Look at that woman,” she says, pointing to me with her pole. “No one’s telling her what to do. And she’s the same as me!”
Swell I think. I’m that bad?
“Her skis are parallel,” he says. “But she is slow like you.”
Do they think that I can’t hear all this?
“I’ll just follow her then,” she says.  “You go away!”
I slow to let them pass as she loses control and takes a tumble, landing on her rear with the tips of her skis, fortunately, facing uphill.
Her husband leans down to give her a hand.
“Stop! Just let me just do this by myself! I don’t need you!”
I cringe. I can’t believe how she talks to this guy.
“Alright,” he says, raising his voice and withdrawing his gloved hand, leaving her seated in the snow. “See you at 3:30 then!” With that, he dashes down the slope leaving a dusting of snow in his wake.
She rights herself, brushing off her snappy red ski pants, then, jams her poles into the hard-packed snow. “Son-of-a-bitch!”
“You ok?” I call to her.
“Fine,” she says. “He pisses me off. That’s all. I don’t want to ski with him. He finally got me back out here and I’m miserable.”
She skies down a few feet to me, sliding onto the front of my skis to stop.
I try to cheer her up. “I get it. I only do a few runs with my husband. That was your husband, right?”
“Oh, he’s my husband, all right,” she says, inching her skis back off my tips. “And, your husband’s fine with that? He doesn’t want to ski with you?”
“Not really, to be honest. I’m too chicken to ski where he goes. He learned that time he took me down a hard blue run that stranded me, paralyzed. An instructor skied by and offered to help me down. That did it!” I laughed. “I mean, he’ll take a run or two with me on my own little slopes then, he’s off and I’m thrilled. I know he’s trying to be nice, but I can tell he’s itching to go to the more challenging slopes. We meet for lunch. It’s perfect for us.” 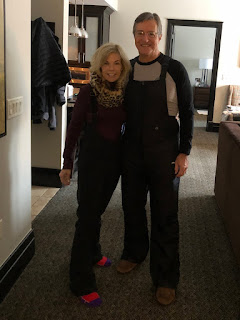 “My husband wants to teach me to ski better,” she says. “Where I really want to be back at the lodge. On the deck. Having a hot toddy!”
“I get it. You don’t want to be forced to do something that you’re not comfortable with,” I say as we move down the mountain.
“It’s not that. He’s just hovers  and it makes me crazy. I like the ski clothes, though,” she adds.
“You look great, I must say.”
“I may have the outfit,” she replies, “but I feel like shit. I like the beginner slopes and that’s where I want to stay.”
“Look, you seem around my age. Here we are, out here in these clunky boots, schlepping on and off the lifts.”
“Yeah,” she says. “He should be thankful I’m up here with him.”
“And you should be thankful he wants you up here with him.”
“I guess,” she sighs.
“You know what I discovered about skiing at 63?” I ask as we begin to move down the slope. She’s slows down behind me, hands gripped to the poles, pizza-pie skis.
“What?” she calls. “Tell me something good about skiing.”
“On a ski lift is the only time my mind goes quiet. I’m not a nature person, but the beauty of the scenery. The wind whistling through the trees. It calms me.”
“I can get that kind of calm in the spa!” she calls out. “I’m screwed. My husband loves skiing. He wants me to love it, too.”
I slow my pace. My mind travels back to when I used to complain to my mother about Hank wanting me to go with him some place I didn’t want to go. Mostly, it was work trips. “Do I need to be there?” I asked him.
“What would you do if you were dating him?” Mom asked.
“I’m not, Mom. We’ve been married 30 years. I don’t have to do all this.”
“Oh, really?” she said. “Well, someone out there would love to do these things with him.” My mom had been married three times, divorced twice, and had learned never to take a good man’s love for granted. It sounds old fashioned in many ways today, but it’s advice. It’s important to recognize the people in our lives who love us and cut them some slack. Mom had a way of bringing me around. “You’ve got it wired with this guy. He’s one of the good ones,” she told me. “Don’t screw it up by being complacent.  You’re lucky he still wants to be with you, you fool.”
The truth was, I wanted to be with him, too. But I’d gotten spoiled living in my little bubble, going only where it suited me.
“Never get complacent,” my mother warned. “It’s the kiss of death.”
“And, neither should he!” I said back to her.
“He’s not. He wants you to be with him.”    Her words always stopped me in my tracks. Now, she’s gone but her voice is with me as Hank and I move into our forty-first year of marriage. I no longer have to be reminded because I know now what I have.  That’s the great thing about aging. You’ve been around, seen a few things and know when what you ‘ve got is pretty damn good.
“Why don’t you ask him to go to the spa with you after skiing?” I call over to her. “Your turn to pick the event.”
It’s the first time I see her crimson lips smile. “Hmmm. There’s a thought.”
“Look, what would you do if you were dating him?”
“What? Oh, shit,” she says, catching herself before she falls again.
“What would you do if you were dating him? That’s what my mother always said to me when I’d complain.”
She hunches over, concentrating on a turn. “Wow, there’s one way to look at it.”
“Your husband seems like a nice guy.”
“Yeah, he is. What else did your mother say?”
“Don’t get complacent. It’s the kiss of death.”
She laughs and I’m not sure what she’s thinking. We round the curve past the yellow sign indicating “Easier Route” when I spot her husband waiting below. So much for 3:30. We both come to a halt, the tips of her skis crossing.
She looks at me through mirrored goggles. “I can’t even remember when we dated. We’ve been married forever.”
“And he still wants to be with you. To do things.”
She nods.
“There you are!” her husband calls. “I was worried sick. I’m sorry I left like that. I shouldn’t have…”
She looks down at him and then back at me. “I’m Cheryl, by the way.”
“I’m Heather. Nice to meet you, Cheryl.”
She shoves off, making her way down to meet her husband.
Posted by Heather Haldeman at 8:04 PM 3 comments: