Last week, I was whining to my sister, April.  “I’m so sick of being nice. It doesn’t get you anywhere. Maybe Mom's right when she says that nice guys finish last.”

I’d called April after being frustrated over a recent incident where I’d felt that one more time; my kindness fell on deaf ears. "I feel like I give my all and it’s never enough.”

“I really try to be a good person,” I told her. “Just…nice.  Thoughtful, you know? I’m trying to do the random acts of kindness thing – even letting in those sneaky drivers who want to merge last-minute into my lane on the freeway for God’s sake!”

April, who never holds back, and often a voice of reason, must have hit her limit with me and snapped back: “Heath, who do you think you are, Mother Theresa?”

“Just be you, Heath. Stay nice, do good things, and don’t worry if the good you put out there comes back to you.”

The following night, I found myself standing amongst a sea of shiny nametags clipped precariously on cocktail dresses and suit pockets. Beside me, my husband, Hank, was chatting up another insurance executive. Cards were exchanged. A meeting was set. I looked to the quintet in the corner. The venue had high ceilings and bad acoustics. Above the din, no one could appreciate the music.

I followed Hank as he worked the room. It’s my occasional moonlighting job – corporate wife. Not a bad gig. I get to tag along to some great places. Meet some wonderful people who have become close friends. Insurance people get a bad rap. It’s anything but boring. Still, rarely have I heard someone say: “I’m going to get into the insurance business!”

But, the industry is a giving one, raising enormous amounts of funds for the underserved. And, that is why we were at this event – to raise money for the Insurance Industry Charitable Foundation.

Hank steered me to another small group. It was all business talk. I scanned the room for someone I knew to have a chat.  A pearl necklace on a petite blonde a few feet away caught my eye. I reached over and tapped her on her shoulder. “I love your necklace.”

She stepped away from her group. “It’s not a big deal,” she smiled. “I can’t remember where I got it.”

“I’ve been looking for one of those,” I told her. “Saw one at the jeweler. But, way out of my price range.”

She looked to be about my age with an executive title on her nametag, but the print was too small to read without my glasses.

“You don’t need to go big,” she said. “Just find a good set of fake, like my tan,” she laughed. “Had a conference in Hawaii last week. I was pale as a ghost. One spray, and here I am!”

An acquaintance of hers walked up, and I politely exited back to Hank and his circle.

After the dinner, I stood up from our table and turned to get my wrap from the back of the chair and there she was, holding her pearl necklace.

“I want you to have this,” she said, putting it in my hand.

I was stunned. “You are so sweet, but I can’t accept this. Thank you, but, this – this is too much!”

People flowed around us, moving past our table to leave.  “Yes, you can,” she said.

“Just pay it forward," she said, cutting me off.  And, then, she was gone, swallowed by the crowd.

I turned to Hank. “Did you see that? Her? This?” I said, holding up the pearl necklace.

“Quick! I need to find her,” I called back to him as I made my way through the crowd to the front of the venue and out to the valet line.

Hank caught up to me and we tried to figure out where she could be. “Maybe her office is nearby and she walked to it,” he said.

“How can I even thank her? I don’t even know her name!”

“I guess you do as she asked and pay it forward,” he said, as we got into our car.

Hank pulled away from the curb while I held the pearls in my hand, staring at them in disbelief. "Oh, I'll pay if forward," I told him. 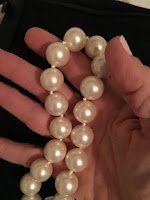 Then, I reached for my phone to send the text I'd started while waiting for our car: 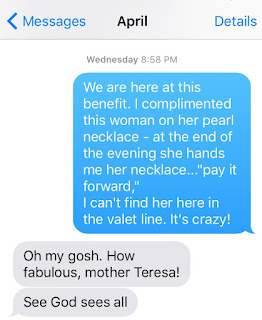 Posted by Heather Haldeman at 7:30 AM No comments:

When did I begin reading Obituaries on Saturday morning?  I mean, is this an aging thing?
To check out who has died? 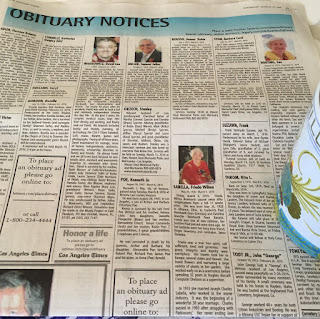 I didn’t start reading the Obits because of some weird morbid curiosity. Or, to learn how people eulogize the loss of their loved ones. I tuned in to read their stories... How did these people live? What did they do? And, in some cases  - I hate to admit - how did they die?

I learn a lot from these people…

Stanley was a holocaust survivor. “Loved by everyone who knew him.”

Jeanne lived to the ripe age of 94 until a stroke took her out. She was a “crackerjack bridge player” and an “avid golfer.” She and her husband formed “lifelong friends.”

And, there’s Harold, 98, who had a “zest for life, learning and exotic foods.”

Of course, there are those who suffered with long battles with disease and one in particular this Saturday morning, David, 56, who suffered from a terrible accident at 15 that left him a quadriplegic. Complex medical issues finally took him, but what an outstanding man he was to go on to earn his BS and MS in Computer Science which led him to a career in computer program development and trouble shooting for Rockwell, Oracle and Sun Microsystems.  His family uses “courage, generosity, and optimism” to describe him.

Then, sadly, there are the young lives lost way too soon, leaving me to wonder why? How? I study their faces…

Still, the take away is mostly positive. No matter what the age, each individual has left his or her imprint, left something, perhaps even a lesson for us to learn.

This makes me think about Erma Bombeck, the illustrious American Journalist who found humor in the mundane lives of suburban housewives…”If I had it to do all over again,” she said, “I wouldn’t worry so much about the dust.”

Oh, how times have changed. It’s not getting the call about the kids doing something sneaky anymore. It’s my eighty-seven year-old mother... 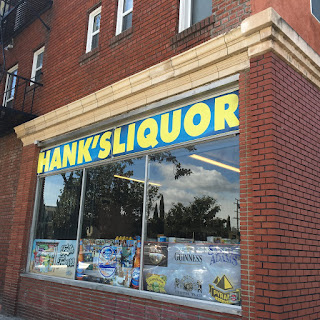 My smartphone lights up. It’s my mother’s care facility calling. Each time I get a call from Sunrise Senior Living, I freeze. Is Mom ok?

I breathe a sigh of relief, resigned now to a new worry - what’s Mom been up to?  With my mother, I never know what to expect.

“Everything is fine,” Paula says,  “but we caught your mother with her walker off-sight following another resident - her friend she calls 'the doctor' -  on his scooter.”

“You mean, they escaped?”

“Well, yes,” she replies. “But, they didn’t get far. One of the CNA’s was making a bed on the second floor and saw them outside the window.  They were heading down 15th Street toward Santa Monica Boulevard.”

“Apparently, they slipped out while a delivery of flowers was being made up front, so the alarm bell didn’t ring.”

A picture of my mother comes to mind, slightly stooped, gripping the walker, eyeglasses slipping down her nose revealing steely blue eyes framed in false lashes. Mom's lazy about using her walker. She needs to be helped and prodded just to keep moving forward. She followed her doctor friend down the street on his little red scooter? After they... "slipped out?"

“She’s right here,” Paula says. “I’m in her room with her talking about it and I think your mom understands now that she can’t leave the premises without us knowing.”

Paula apologizes. “We’ve never had an incident like this before.”

“My mother’s got her ways, Paula. I don’t fault you. But, I have to say, I can’t imagine Mom hustling with her walker down the street. She can barely scramble with it to the dining room. Where were they going?”

“Mom, they provide Advil at Sunrise and you need it to be given to you by the nurse.”

I could almost hear the wheels turning in that mind of hers.

“Well, he offered to take me. Just to have it during cocktail hour. He's very together, you know. He said there was a store right at the end of our block.”

"But, Mom, your lack of balance and alcohol is not a good mix."

"Mom, are you crossing your fingers?"

Posted by Heather Haldeman at 9:32 AM No comments:

It's theirs! So, why am I keeping it? 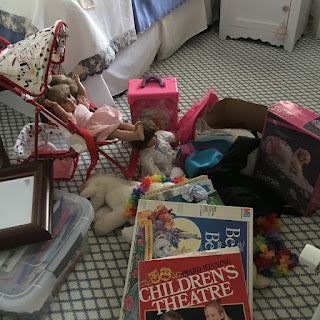 When is the “right time” to get rid of your adult children’s stuff?

For me, it was last weekend. And, it was just the tip of the iceberg.

It started with the day I moved a desk out of my 30-year-old daughter’s over-crowded former bedroom. Which, by the way, we still call “Hilary’s Room.” A room she hasn’t occupied permanently since leaving for college in 2004.

It was as if I had taken the blinders off that day, and had really looked at the room. In the bookcase, among other things, her diploma, her photo albums, a “Happy Birthday” plate perched on a stand. My daughter has grown up. Moved out. Married.  She and her husband live in a home now with lots of space. Why am I hanging on to this stuff?

I headed to The Container Store and stocked up on clear plastic tubs with lids. I was on a mission.

I packed as much as I could into three large tubs and left them in the center of the room for her to claim when she and her husband, Doug, come to Sunday Night Dinner.

“But, Mom,” she said, when I told her to take them after dinner. “These things need to be here.”

That’s when I slipped back into mother-mode. “Ok, I understand.”

Wait! I thought the next morning.  Why am I keeping all this? These are her memories. Her things…

I took a poll among friends.

“Oh, we got rid of that stuff a long time ago,” one said.

“I couldn’t possibly let these things go,” said another.

My children are adults. Enough already. Why am I hanging on?

I go back and forth in my mind, justifying. Shouldn’t I save her dolly stroller and for her own daughter someday?

“No,” my friends told me. “It’s probably not even safe anymore. Trust me, they’ll get their own new shiny ones.”

“What about my son’s Lincoln logs and the Legos stacked in boxes in the garage?”

“Ok, save a few but get rid of the rest,” was the consensus.

Dare I admit that I still have my 33 year-old son’s Castle Greyskull along with four boxes of his baby toys. Or, that we rent two storage units for our 27-year-old’s stuff because he’s always on the road for work and his current place is too small?

Heck, my husband’s mother still has his baby teeth! Am I a bad mother for unloading all their childhood things on them?

I headed out to the market a few days later and purchased a small basket of Hilary’s favorite childhood snacks. Put them in a pretty basket and dropped it and the plastic containers at her house along with a note: “…a little comfort to take you back while you sift through these boxes. Love, Momma”

I called my sister, April, on the way home. “Well, I did it and it’s just the beginning.”