I was just one day shy of my challenge to go three months without buying a new lipstick.

These past few months, I forced myself to shop my makeup drawer. I shuffled through all 76 tubes (and that’s after I gave the duplicates – I always buy 2 - to my hairdresser with the same addiction as me). I even tried standing them upright to look more like a store. Testing them on my hand. They were all just ok.

Nothing gave me a that lift I got when I shopped for a new nude pink on display under shiny lighting, music playing in the background and a salesperson to dote on the big decision. “What do you think?” I’d ask.

The fresh new look on my lips lasted, at best, a week. Then, I was back at it again - my quest for the holy grail of nude pinks.

During this time, I found myself stopping into Sephora and circling the displays like a shark to prey. But I didn’t pounce. Instead, I would call Hank.

On my computer, the Google sidebar, hip to my previous searches, would slide in, touting Charlotte Tilbury’s latest nude pink lipsticks. Dangle. Dangle. I know your addiction…I zeroed in. “Hot Lips Penelope Pink.”  Yum. Dare I?

Nope. I clicked on the “x” and went back to work.

Then, a month ago I almost fell off the wagon. In a weak moment after the end of a stressful day, I found myself at the lipstick counter eyeing the latest “Liquid Nude Pink.”

I took a breath. Who’s going to know?

“I’ll take one of these,” I said, lifting the clear plastic tube out of the sample display at Nordstrom.

I glanced around like a cautious thief as the saleswoman rifled through the drawer below.

She popped up and straightened her skirt. “We’re out of it but I can have it sent. Just takes a few days. No shipping!”

I was almost to the finish line this past Sunday when I landed in Bloomingdale’s seeking to soothe myself. It had been one of those weeks and what better fix than the department store, right?
There I was, right in front of Lancôme. A pretty young salesgirl with a thick Russian accent approached me.

I was practically breathless. “Nude pink.”

She furrowed her brow. “Excuse me?”

“Sorry. Sorry. Does Lancôme have a good nude pink?”

“Natural? Perhaps with a little coral?”

It was perfect. Awww. Just the perfect pink.

Then, I called my lifeline.

“Help, I’m at Bloomingdale’s in lipsticks.”

“Ok, I’m walking over to handbags. I saw a gorgeous Burberry on the way in.”

The next four days I “visited” #232 at Sephora late in the afternoon. I’d tried it on. Didn’t buy it. Just tried it on.

Yesterday, with only one more day to survive the challenge, I stopped in to visit my lipstick. I looked at the name on the tube. “In Love.”

I bought it. One day shy…

Because three months ago, I thought on the 25th of August I’d be at the Bobbie Brown counter whooping it up. Piling on the pinks.

Instead, I was with Hank, out to breakfast presenting him with the wrapped box.

“Uh oh,” he said, grabbing his phone to check the date. “What have I forgotten? What’s the date?”

He slipped the ribbon off and burst out laughing when he saw the lipstick. “I thought it was tomorrow!”

He turned it around like a foreign object in his hands. “Rouge in Love.”

“You see, Hank,” I told him. “Instead of turning to the lipstick counter, I’m learning to turn to you.” 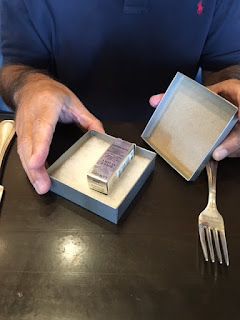 Posted by Heather Haldeman at 9:07 AM No comments: 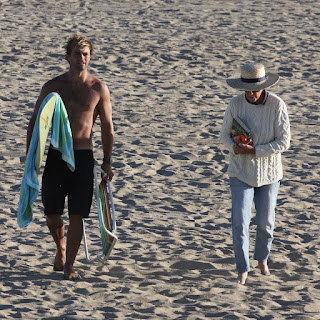 It's 9:30am and my mother-in-law, Jo, is in the kitchen. She's asked me to call her, again, on her cell phone, after my husband, Hank, downloaded Queen's Bohemian Rhapsody for her ring tone. She wants to hear it again.

I call her. She hums along, then, returns to the orange juice maker. The whirring starts up again. “Orange juice, anyone?”

Is she for real?

Yes. This is my octogenarian mother-in-law of sound mind, who embraces the wrinkles on her face with a dusting of light make-up. Her grey hair is femininely cropped and laced with white.  She wears skinny jeans and tailored shirts. “Tucked in!” My mom says in awe. “She tucks everything in and wears a belt!”

We are on our annual summer trip with Jo in Newport Beach, where she rents a beach house. Our adult children drop in and out depending on their work schedules. They bring with them a slew of their friends who enjoy the surf. The action never stops and Jo is right in the middle of it taking pictures. Everyone affectionately calls her “Grandma Jo,” whether they’re related or not.

But this is no ordinary grandma.

Jo is eighty-eight going on twenty-two. She’s Internet savvy. She’s on Instagram and often drives two hours just to to be with her grandchildren or to visit her friends in Los Angeles. She’s well read and current on all the latest news.

“How’s Jo doing?” Mom asks when I checked in earlier today on the phone.

“I hate her,” Mom laughs. “She leaps and dives and runs around. It’s all that Christian Science clean living. She never drank or smoked like me.”

I can hear Jo getting out the cast iron skillet. She’s making her “crispy eggs.” Hank’s favorite.

As soon as that’s served up, she’s making a list for the market and wiping down the counter. I look over at Hank. “You are so lucky. Your mother never ages.”

Jo’s attitude is what keeps her young. She doesn’t resist change. Yet, Jo’s the consummate lady. She’s all about good grammar and napkins in the lap, but can talk surf and navigate a complicated television remote like a pro.

A widow of twenty-two years, Jo has created a full life for herself in Santa Barbara in the home where she has lived for thirty-two years.

My mother-in–law’s i-phone dings as she heads toward the laundry room.

“It’s Ann and Susie (her daughters) figuring out what to bring down here and wanting to know what I need.”

Jo has told me to make sure to tell her if I see a spot on her clothes. “It reminds me of my mother’s friend, Alma. She had spots all over her clothes when she got old. Don’t let that happen to me.”

I promised her that I would, but doubt it will ever be an issue.

Like her grown children, I have become accustomed to her vitality and agelessness. I think nothing of her traipsing up the beach with our son, Joe, after watching him surf for two hours.  Or reading the instructions for Hank’s new drone.

The kitchen is tidy now and Jo bustles about the beach house, moving up and down the steep spiral staircase, wearing her favorite fresh white Converse sneakers - her shoes of choice - with jeans and a crew neck sweater. Her late mother’s gold “S” chain (that she never takes off) catches the light from the large picture window.

After I’d called her cell phone this morning so that she could hear Queen’s tune again, she told me that she wants a Christian Science Hymn, The Lord’s Prayer, and Queen’s Bohemian Rhapsody played at her memorial when the time comes.

Somehow, I’m not too worried about that just yet.
Posted by Heather Haldeman at 9:36 AM No comments: