It Happened One Flight...

“My hair looked good at 6:00am,“ our female flight attendant remarked, swiping a wayward wisp of brown hair behind her ear.  “So sorry for the delays today,” she added as we taxied to the runway en route to New York after a three-hour delay due to weather.

Facing diagonal from my husband, Hank, and me, we’d struck up a conversation after she’d buckled in.  “I’m Lisa, by the way,” she’d smiled.

Lisa told us that she’d been lucky as a flight attendant. “I’ve never had any really bad incident with a passenger and I’ve been at this for ten years. In fact, I was just telling that to the two newer flight attendants working in back.”

Just then a chime sounded.  Lisa reached back to the receiver of the interphone behind her head. Hank turned back to his work and I gazed out at the line of planes ahead of us waiting to take off.

As our plane inched forward in line, I turned around to see what was happening. Lisa was talking to two young male passengers midway back. “What’s going on?” I whispered to Hank.

Soon, she was back in her jump seat.  At last, we were at the start of the runway, ready to take off. As we listened for the revving of the engines, instead came another chime. Another call. Lisa’s face registered calm.

I turned back to my book, reading the same paragraph over and over. “Look,” Hank said, pointing out the window. “We’re going back to the gate.”

I breathed a sigh of relief. Whatever was going on back there, I didn’t want to fly with it.

Passing the gate, we continued on to the remote terminals of LAX with no announcement from the pilot.

“Hank, we’re so far west from the terminal there are weeds growing on the cracks in the tarmac.”

One of the young female flight attendants came into our cabin up front while Lisa went in back.  She faced the cabin; her red naturally full, red-painted lips framed a smile.

“I’m not at liberty to say anything just now. I’m sorry,” adding, “I’m just here smiling back at the passengers who are looking at me for some sort of sign.”

“This is the Captain speaking,” came the strong male voice over the PA. “We have a situation on board and need to return to the gate. There is no danger. But, unfortunately no open gate at this time. One should open up in about ten-or-so minutes. I apologize for the delay. Thank you for your patience.”

I turned on my phone and began texting my daughter, Hilary. “Looks to be some sort of problem with two young guys who looked pretty out of it when we boarded.”

“What? You’re still in LA? You were supposed to leave four hours ago?”

Eleven minutes later, the pilot announced that a gate had opened up and we were heading to it. “We will take care of the situation and we can be back on the runway to take off.”

Even though our “situation” wasn’t affecting safety, or threatening in a violent way, the Captain and crew couldn’t disclose the problem. In the meantime, Lisa and her crew maintained calm.

After what seemed like a slow drive on the 405 at rush hour, we finally turned into our gate. As soon as the cabin door opened, four or five policemen and two EMT’s (very good-looking -I typed to Hilary) moved down the aisle and took the two young men off. No one said a word to them as they made their way down the aisle, clutching their soft carry-on’s, sweating at the brow, pale and clearly having had too much of something.

A young blonde woman came up soon after and stood behind the purple plastic partition. Lisa put her arms around her and the girl fell into sobs. She’d been on the window seat next to them. What had they said or done to this young woman? 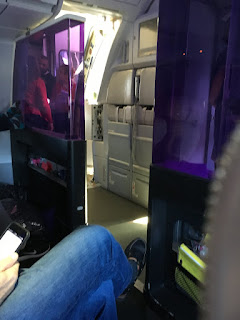 Within minutes, a middle-aged woman in a print dress, a representative of the airline, was at the cabin door taking in the situation.  In swooped a ground agent, a tall gentleman, his airline tag dangling wildly from his neck. “Thank you for your patience,” he said, “unfortunately, our pilots have maxed out their hours due to the this situation and the delay.”

Groans and a symphony of sighs followed.

“But, hey, we’re going to get you some new pilots as fast as we can. Give me ten minutes.”

I turned to Hank. “Now, that’s impressive. At least they’re trying and not just having us deplane and hope for the best.”

Meanwhile, Lisa is calming the traumatized woman who now has decided to deplane. “Don’t worry,” Lisa told us when I asked. “We’ll (the airline) take care of her.”

Returning with the tags still swinging from what must have be a marathon in Terminal 3, our gentleman ground guy returned. “Good news. I found two pilots.”

Behind him, the two pilots emerged, carry-on cases in tow.  The Captain, exclaiming: “Hey, we thought we were going to Dallas. Now, it’s Newark!”

Soon, we were back in line, taxing to take off…and I was perusing the cocktail list on the back of the menu.  “I think I need a drink,” I whispered to Hank.

Somewhere over the Mid-west, Lisa was once again in high gear as she emerged from the galley. Having done an excellent job up front, she advised that there was a medical situation in back and that she could not serve us for forty-five minutes.

Toward the back of the plane, a twelve year-old unaccompanied boy had gotten sick all down the aisle. The three flight attendants where on it, caring for him, and the passengers, and cleaning up the aisle.

One of the newer flight attendants, on her hands and knees cleaning, was being harassed by an older female passenger who claimed that she “didn’t know how to mother. You’re too young. This child needs mothering.”

With a smile on her face, lipstick reapplied, this flight attendant continued her job. Later, when she was taking a respite for a few minutes up front. I unbuckled my seatbelt and went to her. “You are doing a great job. Don’t let some nut get to you.”

“You’ve been professional,” I added. “Don’t listen to anyone who says you are not doing the best you can – because you are!”

Similar in age to my own daughter, I wanted to mother her. It had not been and easy start to this flight. The weather delays. The “situation” with the two guys. Now a sick child. Yet, all three flight attendants were undeterred.

I’ve heard that passengers tend to complain more about flight attendants to the powers that be than give accolades on their service.

For flight attendants, it’s not easy these days. Passengers are crammed in. Often disrespectful with ear buds in their ears when a flight attendant merely wants to ask what they want to drink. I’ve seen it too often. It’s no wonder some get cranky. It can wear one down. Yes, it’s their “job,” but it deserves respect. We all want respect for what we do. It’s amazing the response when you just treat someone kindly.

Upon landing at 2:30am, the British fellow behind us still had his humor. He stood and reached for his bag overhead and gave us a grin.  “All that and all we get is Newark!”

*Lisa, Haley and Isabel - the flight attendants on the March 31st, Virgin America Flight 166, this is for you.  Thank you for your grace under pressure.