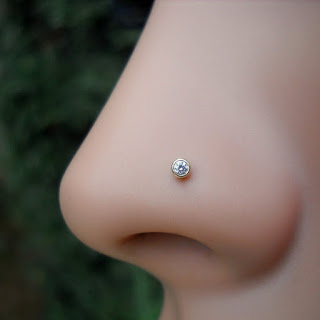 My soon-to-be eighty-nine year old mother, still of sound mind, wants to pierce her nose. “A little diamond stud,” she said, reaching up to touch the side of her nose with a blue-painted fingernail. “Right here.”

Mom has said that she’s wanted one for years. I know this to be true, but figured that she was over it.

Just like the “little tattoo” she’d “wanted for years” on her ankle. She got that on her eighty-fifth birthday - a monarch butterfly she’d chosen from the catalogue at the Shamrock Tattoo Parlor on the Sunset Strip. The place she’d heard “was the best and where all the movie stars go.” The whole family went with her to be a part of the big event that my nephew set up.  And, no, she was not their oldest client to get a tattoo…

Now, it’s the diamond stud on the side of her nose.

My mother has never been what she calls, “the mother with the Peter Pan collar and the bun in the back.” So, a request like this is not out of the ordinary.  For Mom, it’s typical.  When I visited her last Monday, she was wearing her usual sparkly top over stretch pants sporting a long necklace with a big iron cross “like Madonna,” she said.

“I just need to get your permission,” she told me.  “Maybe the nurses (at her skilled nursing facility) can do it.”

I googled nose piercing before I put in a call to her doctor.

Up popped: When should I allow my thirteen-year-old to get a nose piercing?

And, “Help! My fifteen year-old wants to pierce her nose!”

I typed in: Is it safe is it for an eighty-eight year-old woman to get a diamond stud nose pierce?

I scrolled down. No eighty-eight year-olds popped up. Just a sixty-nine year-old woman who’d done it with no regret and a fifty-three year-old who felt that as long as you pay taxes and abide by the law, why not?

I moved on to the LIVESTRONG site and jotted down a few medical reasons why Mom shouldn’t get one at her stage of the game. She doesn’t heal well, she has allergies and a compromised immune system which can lead to infection and the list goes on…

But, then, I thought, why not?  She’s close to ninety.

Like when a friend questioned her about getting the tattoo:  “But, you’ll have it the rest of your life!”

I weighed in with my sister, April, citing all the medical reasons. “Oh, hell-to-the-no, Heath. She doesn’t realize that it’s not just the diamond on top. There’s the post stuff inside.”

Later, I called Mom.  “About the diamond stud…”

“I talked to April and once I heard about anything like an infection, I realized it’s just not worth it. Sickness and all that.”

“It’s like the mink coat,” she said, interrupting me again.

“Yeah. Years ago I wanted a mink coat. It was a symbol of something lush. The diamond stud in the nose today – it’s like a symbol of youth. Way-outness.”

“And, so you’re ok with not getting one, Mom? Can you think of something else that might make you feel young?”

“Men.”
Posted by Heather Haldeman at 8:51 PM No comments:

I love handkerchiefs, talking on landlines, newspapers, and old black and white movies. I love scalloped paper doilies placed under plates of food, and coffee shops with “luncheon specials” served on worn Formica counters with a stool to perch while eating. 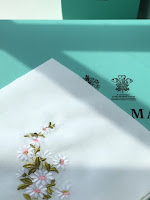 I’m not into the Starbuck’s thing, the modern meeting place. Sitting at a dimly lit wobbly table, sipping fancy coffee and surrounded by people behind laptops just doesn’t do it for me.  Nope, I go for old school – a good cup of Joe without all the fuss.

In London this week, I gravitated at lunchtime to my old favorites - those little narrow eateries where the taxi driver’s go. Nothing fancy, but that’s where you get those good homemade cheese (and meat) sandwiches on cibbatta bread with dollops of mayonnaise atop thinly sliced cucumber and tomato. The teapot is stainless steel, and the water is good and hot. 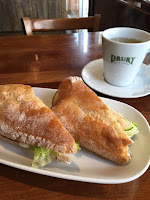 Every year, I see less and less of these. But, Cardinal’s is still there. Yep, that’s me among the construction workers and the taxi drivers, reading The Daily Mail over a plated sandwich.

It’s where the coffee is black or white with no embellishment save a tiny spoon and a cup stuffed with packets of sweetener and sugar. And, the man behind the tall counter still wears an old-fashioned navy and white stripe cotton apron, stained from the morning rush.

Last year, Fortnum & Mason stopped selling my favorite handkerchiefs - the kind with the flowered applique in the corner. “No one asks for them anymore,” the saleswoman said. This year, they sold me their last four out of the stockroom. 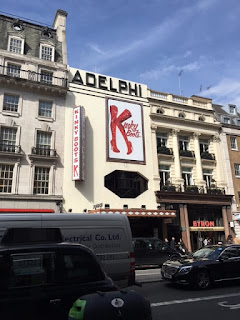 No. I do not want to go back in time. And, it was never more evident than when I went to the theatre last night.

I saw Kinky Boots, the musical.  The theatre was packed. At the end, the audience, as diverse in culture, age and creed as London is, rose to a standing ovation. First to rise, an elderly couple front-row-center, leading the pack.

Clapping my hands amidst the sea of applause reminded me of what is now – a standing ovation for a modern musical about heart and humanity, and conquering and surpassing stereotypes. 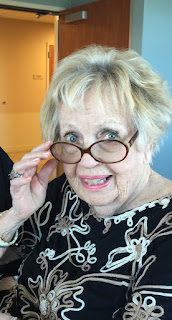 My 88 year-old mother jokes that “the wheels are coming off” when she loses track during one of our conversations.

If I draw a blank, she comes back with: “You’ve got my disease.”

Mom’s pretty with it, but her quick wit and spot-on sayings have subsided.  It hasn’t been overnight, more gradual, little by little.

It’s these bits of no-nonsense that I was raised on. Her sayings are things I repeat. One-liners, like sound bites that give the perfect description.

“I feel like ten miles of unpaved road,” I say when I’m tired. “Like a long alley without an ash can.”

“What?” is the usual response.

My husband, Hank, says I assume people understand what I mean when I throw out one of Mom’s one-liners. “I mean, Heath. Not a lot of people would describe someone as 'dirty bra strap.'”

Often, Hank is my translator.  “What she really means is…”

I once made a list of these sayings with a friend while sitting in an airport in Germany on a work trip. It was her idea. I was a nervous flyer back then and she was trying to distract me.  It worked. And, she got me to a hundred and eight “Marilyn-isms” before my flight was even called. I’d written the list on the back page of a paperback book. Now, the list is tucked away like a valuable gem between two books on the shelf in the guestroom.

On good days, when Mom’s more like her old self, she never misses a beat and her quirky wise sayings come at me rapid fire, seeming to encapsulate my long-winded story in just a few words. On these days, I listen hard, and type them into “notes” on my smartphone to catch and preserve.

Somehow, despite her age, Mom’s Parkinson’s, and her sporadic forgetfulness, she’s still “Marilyn.” Even now, nothing gets past her. As smart as “a tree full of owls,” Mom always seems to know who’s “in a thing.”  Who “needs a fix.”  And, who’s got a “burr up their a**.”

When I complain about something, she tells me to “stop picking the fly s**t out of the pepper.” And, to “stop worrying. It’s prayer in reverse, you know.”

“Well,” she replies. “Consider the source.”

Posted by Heather Haldeman at 7:00 AM No comments:

I’m realizing that I have a lack of tolerance. I am allowing things that annoy me to take control. I want to fix it all right then.

Saturday night, I divulged this to my friend, Randi, when my husband, Hank, and I were out to dinner with her and her husband, Stan.

“I’ve noticed that I have no patience with anything that annoys me,” I told them. “Is this an age thing?”

Randi weighed in straightaway. She relayed what had happened to her at Barney’s that afternoon. “The saleswoman said my gift card had expired and I knew they’d honor it so I asked for the manager.”

She swiped at her bangs that had rested on her lashes. “Next to me was this young woman. And, I’m sure, she was just ‘what-ever, lady.’”

I laughed, knowing I’d do the same thing. And, if that didn’t work, I’d ask for the manager’s manager.

Our husbands went back to their own conversation as Randi and I continued.

“Heath,” she said, “I used to be that girl. The one who said ‘what-ever.’ In fact, I remember looking at women like me and thinking I’ll never be like that.”

“Randi, I’m so not ‘what-ever’ these days. There are all these annoying things that get to me and it’s as if I’m the Annoying Police. I want to right every wrong.”

I started to count all the things that irritated me the following Monday. By two o’clock in the afternoon, I already racked up six! 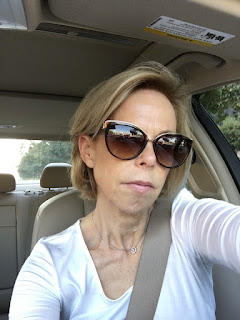 - Someone slipped into the parking spot I was waiting for – with my indicator on signaling that I’d claimed the spot.

- I bought a bagel at the bagel shop and before I’d even had a chance to zip up my wallet at the register, a space invader inched me away.  I looked at her with a nasty hold-on-you-nut-I’m-just-zipping-my-wallet look.

- Saw someone texting while driving next to me. I wagged a finger at them. “Tsk! Tsk!”

- I held open the door for someone at the Optical Shop and they were oblivious. “You’re welcome,” I said, after they passed through without a word or a nod.

- A man tapped a text on his iPhone beside me in an elevator with that awful click-click sound. I had to restrain myself not to say: “Turn your darn sound off!”

- A young woman in a silver Camry tailgated me on the Freeway on my way home. I slowed to 60 just to “get” her.

Some say this lack of tolerance is sensitivity to little annoyances that others don’t share.

But, I don’t like this in me. It’s entitled. As if I’m trying to set the world straight. Is it age, though? Less tolerance for something little that annoys you? I don’t remember being like this when I was younger, but perhaps I was, but just too busy raising a family to notice.

I’ve decided to break it. Not like I’m going to compromise my values and not stand up for what is fair. If I need to speak to a manager, I’ll do it. But if the kitchen cabinets are left open, I’ll just close them. If I see someone texting and driving, I’ll be alert, keep away from them, and be done with it.

I’m going to channel that young woman at Barney’s.

Posted by Heather Haldeman at 7:00 AM No comments: