“There it is,” I whispered to my daughter, Hilary, next to me on the plane landing in Guilin, China.

I just had to see those karst mountains and the Li River again. To introduce this natural beauty on a special trip with Hilary - the daughter my husband, Hank, and I had almost named Guilin a little over a year after our visit there back in August of 1984. 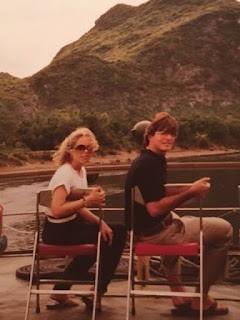 Of course, things are never the way you remember and Guilin today is not the Guilin of 1984.  It’s grown. Cranes dot the landscape next to tall empty block-style buildings by the small airport.  The city center is more modern, yet motorbikes still reign and mere blocks away it is third world living.

On our day trip down the Li River thirty-two years ago, Hank and I were in a wooden “top-deck” boat puttering alone amongst the backdrop of the sloping limestone mountains. The food was a cooked Chinese lunch served on china with stainless flatware.

In 2016, the “boat cruise” was a double-deck boat with assigned seating.  And our boat was not alone with a line-up of similar boats behind us like an LA freeway at rush hour.  The “catered” lunch was Jasmine rice, chicken nuggets and mushrooms, sectioned off in a Swanson TV dinner-style tin and a plastic fork.

Our transport didn’t matter, though. The peaks framing the Li were still majestic. The shoreline was still as picturesque. And, Hilary was taking it all in like Hank and I had all those years ago. “It’s like nothing I’ve ever seen, Mom.  So beautiful…” 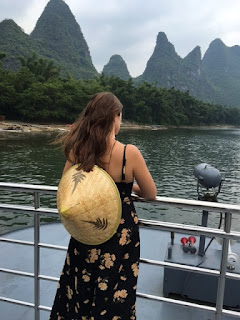 “David” (his American name), our guide for the day, was a native of Guilin who had learned English by listening to “Voice of America.”

“They speak slow,” he said of the radio program. “Easier to learn English.”

David had helped us navigate the crowds waiting to board the boats. “Government boats,” he’d told us, clutching his worn canvas briefcase, adding: “They don’t wait. So stay with me like sticky rice.”

During the cruise, he’d point at a rock formation: “Imagination time! Can you outline the seven horses in the rock?”

“Imagination time! Do you see the human face in that slope?” 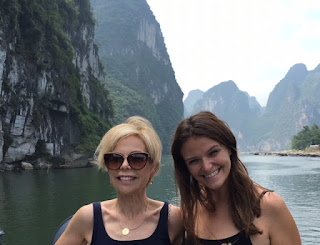 David, thirty-two, had been raised on a farm and at four learned to drive the water buffalo to plow the fields. “My father taught me not to waste,” he told us. "My father said that a single grain of rice should not be wasted. If it falls to the floor, you’ll come back in the next life a water buffalo!”

David is of the new China. He’s read about “Mr. Warren Buffet.” But he’s still a country guy. “Wow,” he said when I asked about life in Guilin and how families live in today’s China. “That’s complicated.”

He is married and he and his wife have a small house on the outskirts of Guilin. “More affordable.”

“She sells clothes,” he added. “Not like Chanel.  I never heard of Chanel before. This, Chanel,” he said, “she likes Chanel.”

I peered out of the van at the squalor of some of the outlying streets. Laundry hanging on dingy windows sills. A string of motorbikes, sporting attached elongated umbrellas as a makeshift hood, whizzed by leaving two women on the sidewalk to deal with the dust in their wake as they sold their red boxes of mooncakes.

“You’re not near those empty buildings by the airport we saw driving in?”

“What is it with all the tall empty buildings?”

The entrance to the Shangri-La Hotel Guilin boasts a “five-star rating” with cheap marble, gaudy chandeliers and a freezer case of Haagen-Dazs ice cream in the hotel lobby lounge. Only a handful speak English and we were the only Westerners on sight. The “signature” Chinese restaurant was just a little too dicey to try after looking at the menu so we ended up in the U bar, a tavern-like spot near the children’s buffet with some interesting  “décor” at the entrance - a giant stuffed Panda bear lying on the floor “passed out” cradling the local brew in his fluffy paw.

Over a meal of vegetables and fried rice, we were entertained by a duet of young male locals. As I maneuvered my chopsticks through the rice, the men began the set. The one on vocals, wearing a fedora, the type I’d seen on a souvenir stand that morning, leaned into the microphone and out came a perfect rendition of a Cat Stevens ballad. Next, it was Chris Martin from Coldplay…and it continued through dinner.

His voice was beautiful, melodic, and graceful.

“Where did you learn to sing like that?” I asked him as we were leaving.

He smiled revealing teeth going every which way.  ”Excuse me,” he nodded quickly, “my English…its not so good.”

As we lifted off, heading to the next city, I looked down at those dramatic limestone peaks.

This time, it wasn’t just the beauty of the mountains that drew me in. Not the Li River either…it was the people we met.  Living in a country that is not free, they were finding ways to express individuality, to grow beyond the confines of their tightly controlled surroundings.  And they’re doing it all on their own.

I leaned back in my seat as the peaks disappeared from sight, leaving me once again in awe.

Posted by Heather Haldeman at 7:20 AM No comments: